Many Years ago, back in the late 1970’s, “Carmidanick Maltese” were born. The name deriving from my children’s names, my former Husband’s name and my own name, belonging to all of us, part of our family.

For many years from a child, I longed for a dog, a companion, something I could love and care for. Finally, when I first got married my dream came true, I acquired my first dog. This dog was not a pedigree but he was my first devoted companion. After came a rescued Afghan and then a Yorkshire Terrier. My Yorkshire Terrier was my first introduction to the show scene and this is where one day I first saw this wonderful white angel. I could not take my eyes of this demure, elegant, fascinating creature. I went to bed and dreamt about it. Its long white silk gown flowing in the wind. Its elegant head held high in a dignified posture. It’s gentle demure expression. It was magical. Every day I longed to be owned by this gift of God then one day my prayers were answered, I finally had my very own Maltese Angel. From this moment on my life changed, forever. 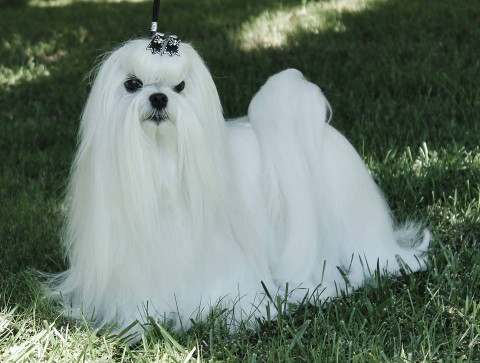 I studied long and hard wanting to know everything I could about this unique breed. This “Jewel of Women”. I attended exhibitions with my own little angel. Although she qualified for Crufts at her first show, nether the less I could see from the other Maltese she was not the perfect show specimen but I loved her dearly and she will always remain deep within my heart. I then set out to purchase a quality female and finally found a beautiful little girl from the late Gwen Barratt of Bleathwood affix. My first litter produced my first Champion. Carmidanick Barnaby who gained his title in a blaze of glory at the Maltese Club Ch. Show 1981 out of 71 Maltese entered. From there on “Carmidanick” went from strength to strength. Our breeding included famous lines such as Vicbrita, Francoombe, and Snowgoose. A beautiful female namely “Davleta Precious Jewel with Carmidanick” joined our small select kennel in 1986. On her very first outing she won the Bitch C.C. B.O.B and Group finalist  at just 11 months old and became Top Winning Maltese in 1987. One of our Males, “Carmidanick Al Capone” after winning Best Junior at Crufts went to Austria becoming Int. and Austrian Champion and Top Maltese in Austria 1991 and 1992.

In 1991 due to personal circumstances Carmidanick had to retire from showing and breeding days sadly ended. In February 2005 I relocated to Southern Spain. I had yearned for another Maltese for some time after loosing my last little girl tragically to cancer. I felt now the time was right for these adorable white angels to enter into my life again. By chance I contacted Tarja kulmula of the famous Maldonnas Maltese and to my utter delight was offered Maldonnas Licence to Love (Minnie) I was not sure at this time whether I wanted to breed and show again but still wanting a quality bitch. It didn’t take long for me to get HOOKED once more and so Maldonnas Licence to Love became my new foundation bitch. A super loving little girl with all the qualities of a show dog. The icing on the cake was when I learned my own Carmidanick Justa Jewel with Caramalta was in her 5 th generation whom also lays behind many a Maltese today. It was like Minnie was meant to be. Minnie was shown on a limited basis, her first outing in Gibralatar age 15 months and thrilling us by winning B.O.B and qualifying for Crufts. She then became International Champion before being retired for maternal duties

In 2007 Caramalta That’s My Boy (Teddy) joined us from the famous Caramalta kennels winning Best Puppy and Qualifying for Crufts his first time out in UK at the tender age of 7 months. In 2008 Minnie and Teddy gave us a beautiful litter of two girls and two boys. My first litter for more than 17 years. One of these girls was retained for showing namely Carmidanick Good Golly Miss Molly (Molly) our X Factor baby. A fabulous little lady having all the qualities of a Perfect English Type Maltese having a most beautiful broad head, muzzle, large dark eyes, blackest of pigmentation, short coupled, a mantle of heavy straight silky coat topped with her outgoing super personality, I could not have asked for more.

In January 2010 we were privileged to have join us Maltangel American Dream (Morgan) from the famous Maltangels kennels in California, U.S.A. wishing to retain the true English type Maltese but with the elegance of the American type. Morgan has amazed us in the ring going beyond all expectations.  Apart from all the qualities of a beautiful Maltese Morgan also has a great attitude and wonderful ring presence of which he is now passing on his wonderful virtues to his offspring having all proven themselves in the show ring. Morgan became a Multi junior Champion and later a Multi Champion. His son Carmidanick New Kid On The Block (Oliver) is now following in his Father’s footsteps, already himself a Multi Junior Champion.

I shall always feel honoured and  forever grateful to the aforementioned Ambassadors of this unique breed for entrusting me a share of their beautiful ancestry.